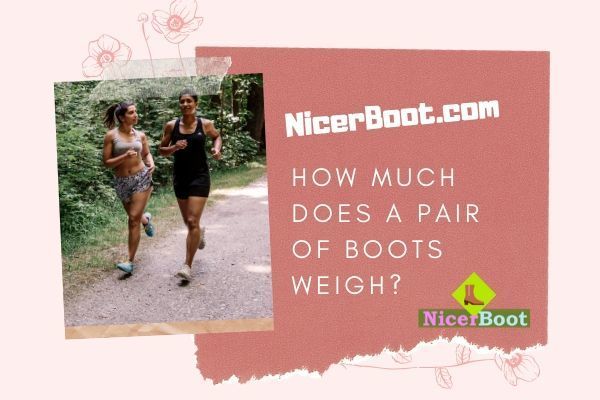 How much does a pair of boots weigh?

The weight of the boots you choose to wear can significantly affect their performance. For people who wear boots for athletic purposes, lightweight boots are quite useful. Shoes that are meant for industrial means often tend to weigh more as they have features that ensure durability, protection, and more. How much do boots weigh? In the case of boots, their weights can vary depending on the specific kind of boots you choose to wear. Read on to know how some of the following types of boots generally vary in weight.

1. How much do steel toe boots weigh?

The weight of any kind of boot can depend on the brand of boot you are wearing. However, steel toe boots are usually heavier than other types of boots. The reasons are kind of obvious. The steel toe of these boots is meant to protect your toes at work. The steel is usually heavy, which increases the weight of the boots. Many have found that steel toe boots with a good amount of protection features are around 5 Ibs.

2. How much do ski boots weigh?

Although older ski boots used to weigh a lot more, you can now find lighter ski boots in the market. Lighter skis mean that you can ski for a long distance in them. You will not be experiencing tiredness or fatigue too quickly. On average, ski boots weigh around 2 kgs per boot. They do not necessarily weigh less incase of ski boots meant for women and children.

3. How much do hunter boots weigh?

Hunter boots are usually made out of vulcanized rubber. Because of that, they can tend to feel quite heavy on the feet. You will find that original hunter boots can weigh quite a lot. They can be around 4 pounds. Fake hunter boots usually weigh much less and that is because they are made out of cheap rubber. This can be a good trick to recognize if you are buying real hunter boots.

4. How much do army boots weigh?

Army boots or combat boot weight varies between a small range. Most army boots come in similar weights and can differ mostly on the height. The most common weights of army shoes range from around 1.2 to 2.4 Ibs. They are relatively lighter compared to the other types of boots.

5. How much should hiking boots weigh?

Hiking boots have features such as full shanks. They are completely rigid so that they can support your weight when you are climbing rock slabs or boulders. Moreover, the outsole of the boots is the primary contributor to the weight of these boots. On average, hiking boots weigh around 2 to 3 pounds approximately.

6. How much do cowboy boots weigh?

Cowboy boots consist of high heels that are traditionally made from stacked leather. Other common features include a pointed toe and a high shaft. They truly are a classic pair of American boots. The average weight of each cowboy boots is said to be around  3 to 4 Ibs.

7. How much do snowboard boots weigh?

In snowboarding, the gear and the snowboard itself can be quite heavy. The weight of the boots you wear during snowboarding can hence be a drawback. In most cases, it has been seen that snowboarding boots weigh around 6 to 8 Ibs. It isn’t much of a reassuring mark but snowboarders tend to adjust themselves to it.

8. How much do plastic boots weigh?

In comparison, plastic boots generally weigh less than any of the other boots mentioned above. The reason is its material. They tend to mostly be rain boots and don’t consist of many features that could increase their weight. They tend to way close to or less than a pound. Hence they are quite a lightweight option.

Knowing the weights of the different types of boots can be helpful when deciding what to purchase. Depending on the purpose of the boots and how lightweight or reinforced you need them to be, you can go for the boots that are the best choice for you.

What are the best shoes for boot camp workout?

Which is the best treadmill for home under $500? PickFairly

How to choose winter boots – pickfairly

What Are Roper Boots?

Easy techniques of blousing your boots like a pro

How to Clean Timberland Boots?

How to Clean Suede Boots?