A simple addition or topping on many delicacies, whipped cream has always been a joyful treat for me. Only the look of a delicious dollop of puffy white creaminess on top of desserts or drinks is enough to make me happy. The airy goodness is everything that you expect it to be upon looking at it – light, fluffy, and delicious. I add this condiment to many of my dishes. From most experiences, whipped cream has only made my favorite dishes even better. Not only does it taste great, but it also adds a unique change in texture and consistency to the dish I serve it with. Apart from the uses that involve mainly aesthetics, whipped cream is a crucial part of many of my recipes.

I’ve always had a sweet tooth, but the best part about whipped cream is that it can be incorporated into savory dishes as well in its basic form. Some of my earliest memories include going to the ice cream shop and ordering a big ice-cream sundae. The topping added the right amount of whipped cream, and that was always one of the best parts. And we all got to agree that we always end up getting some of it over our cappuccinos and shakes on cheat days, right? That has always been customary for me.

Read on to know more about whipped cream, how I make it, and how you can use it in many different ways.

Here’s an overview of what it is, how it is made, and a glance over its many uses:

What is Whipped Cream?

Whipped cream is a form of a cream that occurs upon the incorporation of air into the heavy cream. It is a type of colloid. Another name for whipped cream is crème Chantilly. It is entirely a commonly used condiment in many cuisines and cultures. Whipped cream can be seen used as a topping most commonly on both hot and cold food. It has been seen being used since as early as the 16th century with coffee, chocolate, liqueurs, fruits, etc. It was either in the mixture or poured on top.

How to make Whipped Cream?

Whipped cream is usually made in one of the two common ways. One way is to mechanically agitate the cream with a whip, whisk, or a high-speed blade. Another way is to inject gas under high pressure. It expands rapidly when released from pressurized containment. The partially coalesced fat molecules form a stabilized network which traps air bubbles upon whipping. The result is a colloid that is double the amount of cream. The type of cream I would suggest for you to use is full fat, or higher-fat cream is applied. This is because low-fat cream does not whip well and doesn’t produce a stable foam.

How to make homemade Whipped Cream?

I often find that when I’m making cheesecakes or other homemade stuff, getting store-bought whipped cream often slips my mind. Do I opt for Cool Whip during times like this? Not. I want my homemade delicacies to be authentically homemade. That’s when I make my own whipped cream from scratch. It’s not difficult at all as it requires only three simple ingredients – heavy cream or whipping cream, powdered sugar, and vanilla extract. Now, a question I often get asked is if heavy cream and whipping cream are the same. While they are very similar, they aren’t exactly the same.

The equipment that is most commonly used is a whisk, an electric or hand mixer, or a food processor. Other methods can include a whipping siphon. Nitrous oxide dissolves in the butterfat under pressure. When the pressure is released, bubbles are produced. This produces whipped cream. However, for making it at home, the most convenient method would be the whisk of the electronic/hand mixer method. One thing to keep in mind is to not over-beat or over-whisk the whipped cream too much.

How to Stabilize Whipped Cream?

Other than using the right type of dairy, the temperature is an important factor. I recommend using cold mixing bowls and whisks that kept in the freezer to make the whipped cream. It is also recommended to use cold cream for whipping. Cooler temperatures help keep the foam firm. Using regular sugar for flavoring can weigh down the cream. Hence it is recommended to use powdered sugar instead. The ratio of whipped cream to powdered sugar that I use is usually 2:1. It gives me the most stable foam. For making whipped cream, I use full fat or higher-fat cream. This is because low-fat cream does not whip well and doesn’t produce a stable foam. The formation of a stable structure and stabilization of the air bubbles upon whipping the cream occurs due to the presence of fat globules. Hence the fat content in whipped cream is high. It is around 30% to 36% milkfat.

How long does Whipped Cream last?

Homemade whipped cream, unfortunately, lasts for a shorter time compared to aerosol canisters from the market or Cool Whip. It will last around 2 – 3 days if you keep it in hygienic conditions in the freezer.

How to make Coconut Whipped Cream?

Lots of people are lactose intolerant or vegan. They shouldn’t have to be left out from the experience of enjoying whipped cream. A very delicious substitute for whipped cream is coconut whipped cream. It is a non-dairy version of it. I make mine with so e store-bought coconut cream. I chill the can of cream overnight in the refrigerator and then whip the hardened cream and add sweeteners of my preference. However, liquid sweeteners will weigh it down, so be careful about that.

How many carbs in Whipped Cream?

Whipped cream is ultra-low in carbohydrates. Hence many keto diet recipes contain whipped cream. It is high in fat and cholesterol, hence an overall recommended component for followers of the keto diet.

What are the different variants of Whipped Cream?

Whipped cream is commonly found to either have no added flavors. Other than that, people add sugar or other flavorings such as vanilla, coffee, chocolate, and orange to it.

Both whipping cream and heavy cream are suitable for making whipped cream. The only difference between them is the amount of fat content. Heavy cream has 36% fat whereas whipping cream has 30% fat. A substitute if you have neither in your hands is a mixture of butter and regular milk. It won’t give the same results. However, it is still a good option for emergencies.

The History of Whipped Cream 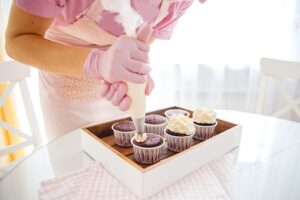 The whipped cream was popular in the 16th century. It was often sweetened and aromatized. The writings of Cristoforo di Messisbugo (Ferrara, 1549), Bartolomeo Scappi (Rome, 1570), and Lancelot de Casteau (Liège, 1604) were quite popular and were often followed. The name that was used for whipped cream was cream snow. Until the end of the 19th century, naturally separated cream was whipped using willow or rush branches. The foam that would form on the surface would be skimmed off from time to time and then drained. This process took around an hour or more. Later, centrifuge-separated high-fat cream was used to make whipped cream. The whipped cream was used in pyramidal shapes with coffee, chocolate, liqueurs, fruits, etc. It was either in the mixture or poured on top.

What are some common uses of whipped cream?

Whipped cream is most commonly used as a topping. Desserts such as pie, ice cream, cupcakes, milkshakes, waffles, cakes, jello, hot chocolates, cheesecakes, pudding, etc – all are often seen to have whipped cream on top. Another common use of it is as an ingredient in many desserts. For example, it is used as a filling for layer cakes and profiteroles.

If you don’t have any allergies but are unable to get your hands on heavy cream or whipping cream, there is an alternative. Whipped topping powders such as Foster Clark’s whipped topping mix produces whipped cream when mixed with milk. Beating cold milk with the mix at high speed for around 7 minutes produces a good amount of foam. Chilling it in the fridge for around an hour before use gives even better results.

Although these alternatives are really good options if you are unable to enjoy the real thing, there’s still a catch. Actual whipped cream made from full-fat dairy whipping cream is always known to have the most superior taste and uses.

pickfairly.com website is a participant in the Amazon Services LLC Associates Program, an affiliate advertising program designed to offer a means for sites to earn advertising fees by advertising and linking to amazon.com